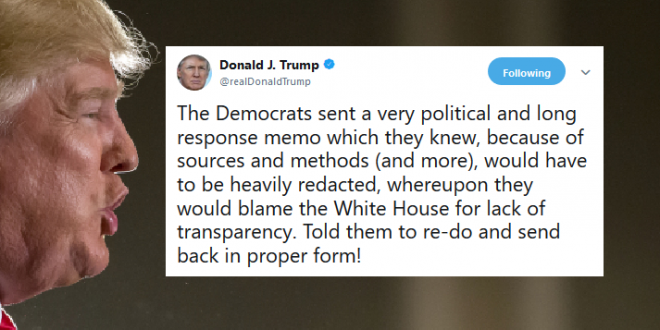 President Donald Trump on Saturday morning offered an explanation for his decision not to release a Democratic rebuttal of the Republican memo that made the case the F.B.I. abused its powers and was politically motivated in the spying on of Carter Page.

Democrats have been angling for the declassification of their memo, which they claim outlines selective omissions made by Representative Devin Nunes, who authored the GOP document the Trump administration cleared for release last week.

Trump tweeted Saturday morning the Democratic memo was a “very political and long response.” The president said the Democrats knew, because of the sensitivity of the information they included in their memo, that it would need to be heavily redacted.

The Democrats sent a very political and long response memo which they knew, because of sources and methods (and more), would have to be heavily redacted, whereupon they would blame the White House for lack of transparency. Told them to re-do and send back in proper form!