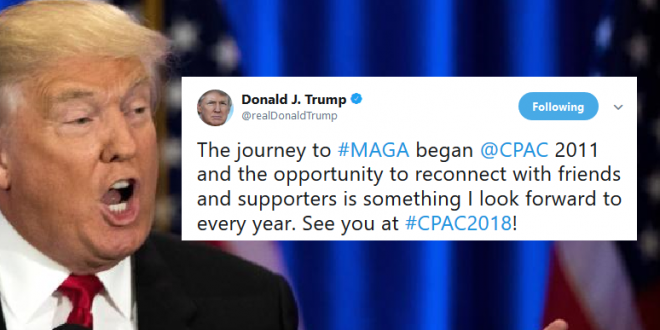 President Trump confirmed Monday his upcoming appearance at the Conservative Political Action Conference, a major annual gathering of conservatives near Washington, D.C., that will take place next week. Trump’s speech to the conservative confab in 2011 is widely viewed as the beginning of his foray into politics.

The president attended CPAC just a few weeks after his inauguration last year, where he delivered a speech celebrating his election victory and slamming the media for treating him unfairly. The White House has not said which day of the three-day conference Trump will address the event.

Longtime JMG readers may recall that Trump attended his first CPAC as the official guest of the now-defunct homocon group, GOProud.

Yes, you can blame homocons for Trump.

GOProud wanted to make a big impression at the conference, so Chris Barron, the organization’s chairman, called in a favor from a GOProud supporter, Republican political operative Roger Stone, who was close with Trump. They finalized the details of the surprise appearance just days before the conference began. “On our side of the aisle, we’re hard-pressed to find celebrities that people get excited about. Democrats have every TV star and movie star,” Barron said. “I thought, let’s do something fun. Let’s make this entertaining and will get people excited. And frankly, it did.”

Barron and LaSalvia recall the morning leading up to Trump’s speech as a hectic, logistical nightmare. Trump’s private jet, which he loaded with friends to watch his remarks, was too big to land at Reagan National, the airport closest to Washington, so it touched down at an airport nearly an hour’s drive away that had longer runway, requiring CPAC to push back his speaking time.

When Trump finally arrived at the hotel in northwest Washington, LaSalvia and Barron met him in a private suite where he could prepare. LaSalvia remembers Trump seeming rattled and unlike the braggadocios persona he portrayed on television. Trump asked for a few minutes to prepare in the bathroom. When he came out, an aide handed Trump a hand wipe. “He wiped his hands, and then I saw him looking around for a garbage can. He didn’t see one, so he just threw it down on the middle of the floor of the hotel suite,” LaSalvia recalled. “It was kind of weird.”