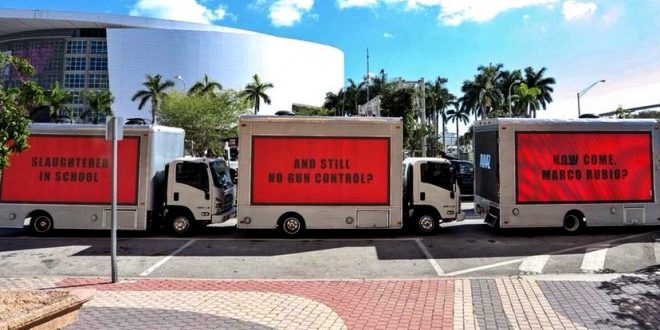 The moving missive aims to call out Rubio just days after a gunman with what police say was an AR-15-style rifle stormed a high school in Parkland, Florida, leaving 17 people dead. Its placard trio borrows from the Oscar-nominated movie, “Three Billboards Outside Ebbing, Missouri,” about a mom who rents road ads to call attention to her daughter’s unsolved murder.

Avaaz, an online activist group, created the campaign targeting Rubio, which also was spotted rolling through downtown Miami and Little Havana. “Florida has notoriously lax gun laws, and Rubio, who is supported by the NRA, has never attempted to reform them,” Emma Ruby-Sachs, Avaaz’s deputy director said. “The senator ranks as one of the highest recipients of NRA contributions and has received an A+ rating from the NRA.”

Previous Parkland Survivor Blasts GOP For Sending Thoughts And Prayers But Freaking Out Over “Rainbow Wedding Cake”
Next Trump Reacts To Mueller’s Indictments: No Collusion!