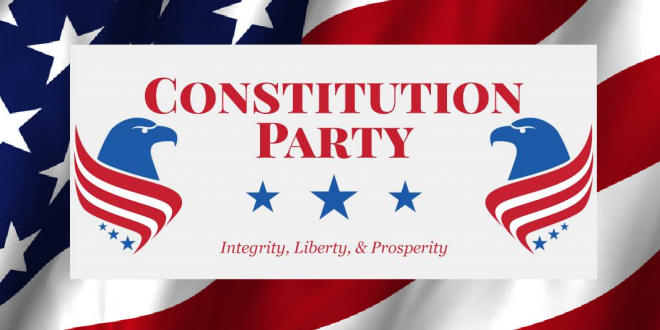 The Constitution Party gratefully acknowledges the blessing of our Lord and Savior Jesus Christ as Creator, Preserver and Ruler of the Universe and of these United States. We hereby appeal to Him for mercy, aid, comfort, guidance and the protection of His Providence as we work to restore and preserve these United States.

This great nation was founded, not by religionists, but by Christians; not on religions but on a foundation of Christian principles and values. For this very reason peoples of all faiths have been and are afforded asylum, prosperity, and freedom of worship here.

The goal of the Constitution Party is to restore American jurisprudence to its Biblical foundations and to limit the federal government to its Constitutional boundaries.

The above logically leads to this:

No government may legitimately authorize or define marriage or family relations contrary to what God has instituted. We are opposed to any judicial ruling or amending the U.S. Constitution or any state constitution re-defining marriage with any definition other than the Biblical standard.

We reject the notion that homosexuals, transgenders or those who are sexually deviant are deserving of legal favor or special protection, and affirm the rights of states and localities to proscribe offensive sexual behavior. We oppose all efforts to impose a new sexual legal order through any courts or legislatures.

Finally, we oppose any legal recognition of homosexual or civil unions. We affirm the value of the father and the mother in the home and we oppose efforts to legalize adoption of children by homosexual singles or couples.

You’ll be shocked to learn that the Constitution Party raised money for Roy Moore’s Senate run.

A question, and sometimes accusation, that we in the Constitution Party are often confronted with is whether the party wants to establish a theocracy. The answer to the question depends on whose definition of “theocracy” you’re using.https://t.co/V8SDLl5yD7

Previous Betsy DeVos Grades Her First Year: Solid B+ To A-
Next Mueller Files New Charges Against Manafort And Gates