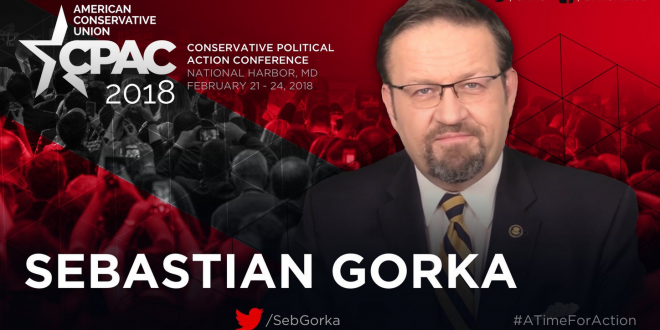 “These salt of the Earth Americans look at that man and say: ‘Yeah he’s a billionaire; yeah, he’s the most famous man in the world. But you know what, if I had a billion dollars I’d be just like him. I’d be eating Big Macs on Air Force One just like he does.” – Alleged Nazi Sebastian Gorka, speaking today at CPAC.

“Remember, we’re only at the beginning of FISA-gate, which eventually will be Obama-gate,” Gorka told attendees of the annual Conservative Political Action Conference. “It’s not the Ben Rhodes of the world, it’s not the John Brennans, it’s not the Susan Rices, who are only culpable for the criminal regime we had that spied on Americans illegally,” he said, citing several senior Obama administration officials. “Guess what, somebody had to let them.” “And guess what,” Gorka continued. “It’s the last president of the United States.”

Sebastian Gorka tells CPAC that Trump’s election is proof that God exists because if Clinton had won, “we would have lost our republic.”
https://t.co/9dZzjIgiXh

Sebastian Gorka, who has a phony PhD, rails that the media is a “bunch of liars.” https://t.co/rVNRkoiyF9