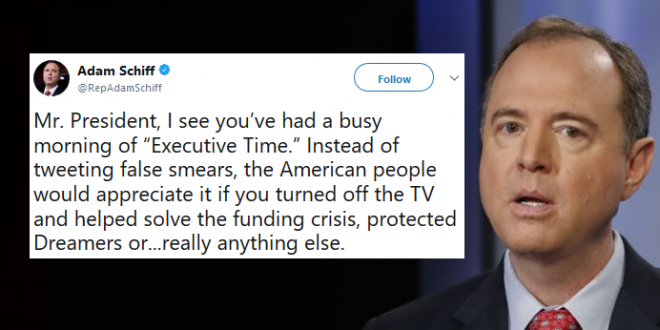 Rep. Adam Schiff (D-Calif.) on Monday fired back at President Trump after Trump ripped the California Democrat as “one of the biggest liars and leakers in Washington.” Schiff, the ranking Democrat on the House Intelligence Committee, has been a vocal critic of Trump.

In recent days, he became a central figure objecting to the release of a Republican-crafted memo that alleges surveillance abuses at the Department of Justice. The four-page memo was released Friday after Trump declassified the document. The president tweeted that it “totally vindicates” him in the ongoing probe into Russian election interference.

“Executive time” is how the White House lists Trump’s lengthy periods with no official scheduled business.

Little Adam Schiff, who is desperate to run for higher office, is one of the biggest liars and leakers in Washington, right up there with Comey, Warner, Brennan and Clapper! Adam leaves closed committee hearings to illegally leak confidential information. Must be stopped!

Mr. President, I see you’ve had a busy morning of “Executive Time.” Instead of tweeting false smears, the American people would appreciate it if you turned off the TV and helped solve the funding crisis, protected Dreamers or…really anything else. https://t.co/lVqQRu2Gjl