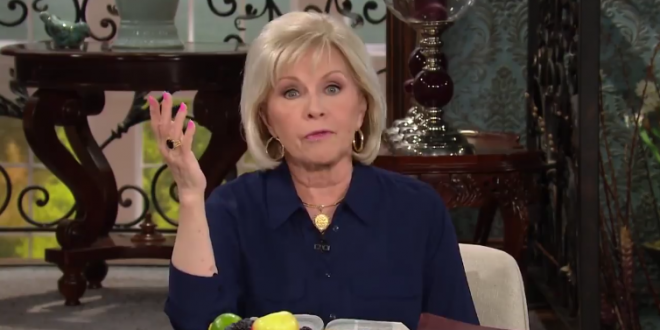 Scamvangelist Gloria Copeland: You Don’t Need A Flu Shot Because Jesus Already Gave Us One [VIDEO]

Back in 2013, the Texas megachurch run by televangelist Kenneth Copeland, a member of President Trump’s faith advisory council who recently became the proud owner of a Jesus-provided private plane, was at the center of a measles outbreak that was attributed to the church’s belief that congregants can forego vaccines because Jesus will protect them from illness.

You’d think that given past experience, Copeland’s Eagle Mountain International Church might have learned a lesson, but you’d be wrong, as yesterday a video was posted on the ministry’s Facebook page featuring Copeland’s wife, Gloria, telling people that there is no such thing as a flu season and that they don’t need to get a flu shot because “Jesus himself gave us the flu shot.”

Watch the clip below in which Copeland binds the influenza virus “in the name of Jesus” and advises her followers that they too can avoid the current nationwide outbreak by simply repeating, “I’ll never have the flu.”

Previous WH Worried FBI Head Will Quit If Memo Is Released
Next Trump: I Love Orrin Hatch Because He Said I’m The Greatest President Ever (Hatch Spox Denies) [VIDEO]