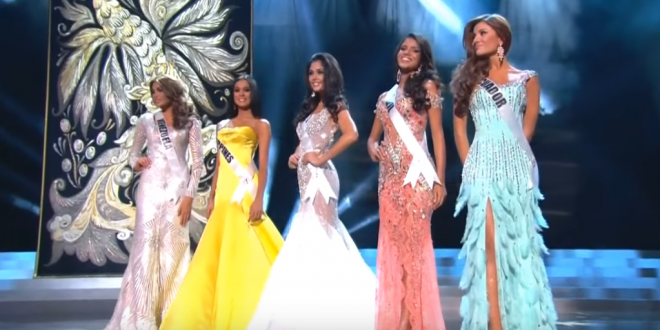 REPORT: Trump Rigged The Miss Universe Pageant To Favor Countries Where He Had Business Interests

According to a piece published today by the New Yorker, judges at a recent Miss Universe pageant compared notes after the naming of the finalists and were shocked to realize that several of the women named had not been selected by them. Well, you know where that’s going:

A day or two before a pageant began, Trump would casually visit the contestants while they conducted their final rehearsals. Former contestants told me that Trump would circulate among the young women, shaking hands and chatting with each of them, periodically turning to speak with Paula Shugart, the president of the Miss Universe Organization, who followed him at a discreet distance. (Paula Shugart declined to comment.)

Adwoa Yamoah, who competed as Miss Canada in 2012, told me, “He made comments about every girl: ‘I’ve been to that country.’ ‘We’re building a Trump Tower there.’ It was clear the countries that he liked did well. He’d whisper to Paula about the girls, and she’d write it down. He basically told us he picked nine of the top fifteen.”

Kerrie Baylis, who was Miss Jamaica in 2013, described a similar scene and added that, when the finalists were announced, “the list looked like the countries that Donald Trump did business with, or wanted to do business with.” Shi Lim, who competed that year as Miss Singapore, told me, “The finalists were picked by Trump. He was really in charge. We called it the Trump card.”

A spokesperson for the pageant, which was owned by Trump at the time, says he was permitted to “participate” in naming the finalists and was, apparently, allowed to overrule the judges without their or the audience’s knowledge. Trump sold the pageant, which remains very popular in Latin countries, following the outcry that erupted after his “Mexicans are rapists” rant. Hit the link for the full piece by Jeffrey Toobin.