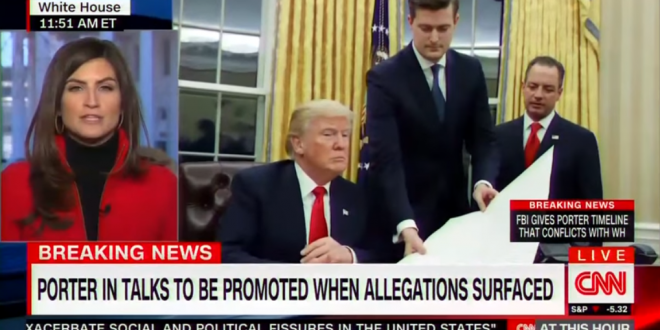 You can’t make this up. With FBI Director Christopher Wray contradicting the White House’s story on when they knew about the allegations that ex-staffer Rob Porter abused his ex-wives, CNN is now reporting that Porter was under consideration for a promotion when the accusations publicly surfaced last week.

“We’re learning not only did he take an important role in the White House, not only that, Rob Porter was in serious discussions to be promoted when he abruptly resigned last week from the White House,” CNN’s Kaitlan Collins reported today.

One of the roles that Porter was being looked at to potentially fill at the White House was deputy chief of staff, which recently became vacant. White House Chief of Staff John Kelly has come under fire over his initial response to the allegations levied against Porter as he passionately defended the former staff secretary.