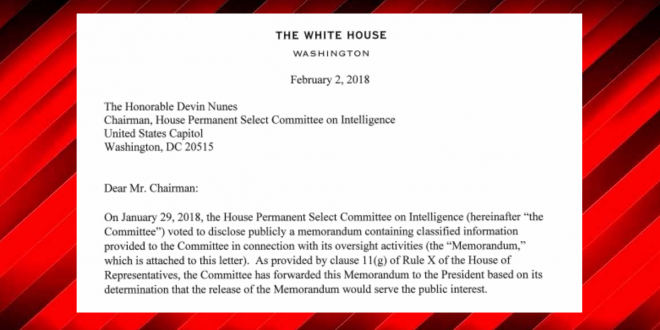 The Nunes memo is a document created by the staff of House Intelligence Committee Chairman Devin Nunes (R-Calif.) that alleges the FBI abused its surveillance authority, particularly when it sought a secret court order to monitor a former Trump campaign adviser. The FBI and the Justice Department had lobbied strenuously against its release. On Wednesday, the FBI had said it was “gravely concerned” that key facts were missing from the memo.

Read it in full at the link above.

The memo reminds of a million different smoking gun Benghazi scoops that fell apart once the full context became known. Or even the bombshell Peter Strzok texts that fell apart like a day after they were released.

We know now the FBI was actively investigating both campaigns during the 2016 election but only chose to publicly announce (repeatedly!) their investigation of Clinton while keeping the Trump campaign investigation *completely* secret the entire time.

If *anyone* working on the Trump investigation wanted to hurt Trump in 2016 they could have leaked details of the investigation. They did not. In fact, FBI sources went so far as to tell the Times there was no Russia connection!
(There *were* a number of anti-Clinton leaks)

And all this is, apparently, evidence that the FBI was engaged in a conspiracy to get Clinton elected?

Literally none of this makes any sense and it’s an insult to everyone’s intelligence.

And it’s depressing as hell to watching smart people pretend to be this stupid.