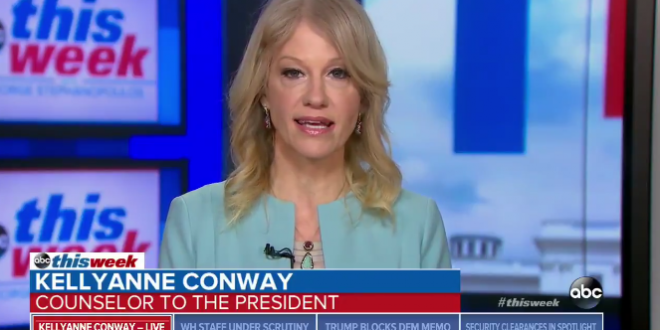 “I spoke with the president last night about this very issue and he wanted me to reemphasize to everyone, including this morning that he has full confidence in his current chief of staff General John Kelly and that he is not actively searching for replacements,” Conway told ABC’s George Stephanopoulos on “This Week.”

Conway on Sunday also defended the president’s treatment of women in the White House. “Why would someone like me and other women work there?” Conway asked.

Conway also appeared on CNN and Fox News this morning.

Responding to @SenGillibrand’s tweet that Congress should hold hearings with women who have accused Pres. Trump of sexual assault, @KellyannePolls tells @GStephanopoulos “Those accusers have had their day…I don’t need a lecture from Kirsten Gillibrand or anybody else.” #ThisWeek pic.twitter.com/iefif4Nh4q