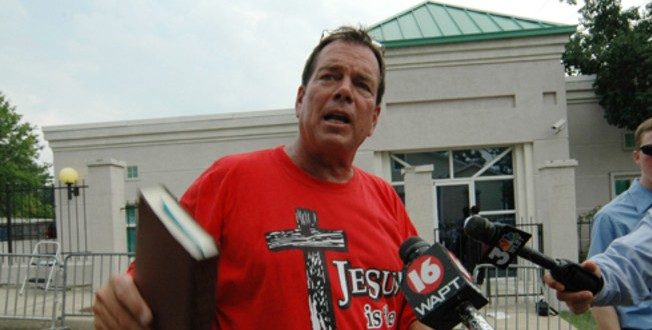 Concord pastor Phillip “Flip” Benham was arrested for threatening a volunteer at a Charlotte woman’s clinic. The pastor, who holds rallies with dozens of people throughout the week, especially at woman’s clinics that provide abortions, told Channel 9 the arrest was “bogus.”

A volunteer at A Preferred Woman’s Health Clinic on Latrobe Drive in Charlotte claims the pastor threatened her life during one of his rallies. The clinic’s director told Channel 9 in a statement that they are scared by the group’s “pattern of violence.”

The volunteer said Benham approached her and “menacingly” and “repeatedly” told her, “You are dead,” and was fearing the threat would be carried out. Benham claims he did not threaten the clinic volunteer, but rather said she was “dead in her sins.”

“We have long warned the city that the tactics employed by Benham and his crew escalate,” said a statement from Calla Hales, clinic administrator. “We were relieved when police issued the protective order. I wish I could say I was surprised when he disregarded the order and came back to my clinic today. My volunteers and I are scared…I am imploring the city of Charlotte to do something about the violent behavior in front of my clinic.”

Last month, Benham was escorted by guards from a school board meeting, during a debate over whether the district should adopt a revised multicultural policy that would expand to include sexual orientation and gender identity. The school board voted 7-2 to support the policy change, outraging conservatives who insist the change is “social engineering” that usurps the role of parents in teaching religious and moral values.

Flip Benham, as you may know, is the father of infamous twin anti-LGBT activists David and Jason Benham. The elder Benham says he’s “lost count” of the number of times he’s been arrested.