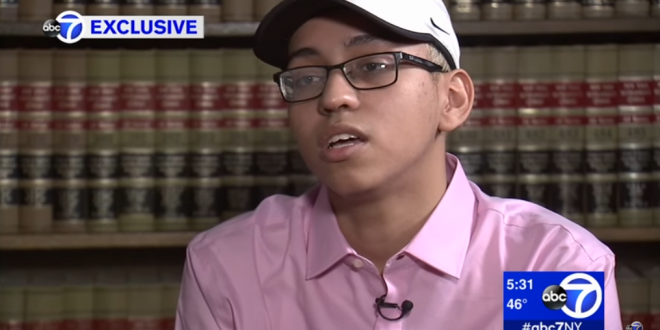 A brief cell-phone video captures a harrowing September 27, 2017 assault on gay student Abel Cedeno in his Bronx high school class by Matthew McCree, joined by his friend Ariane Laboy, as Cedeno defends himself with a knife, fatally wounding McCree and slashing Laboy.

McCree, in a white T-shirt, can be seen charging across the classroom and pummeling Cedeno, in a pink shirt, with his fists, and Laboy joining in the fray, as well, while students are screaming in horror. As the nine-second video concludes, McCree is still standing and an adult in a red shirt has pulled Cedeno away.

Attorneys for Cedeno, Christopher R. Lynn and Robert J. Feldman, are calling for the manslaughter charges against Cedeno to be dropped in light of this evidence, which backs up what Cedeno told the grand jury as well as what student witnesses told the police.

Hit the link for much more. Cedeno is currently free on the bail that was provided by local gay men. The family of the dead student is suing the city of New York for $25 million.