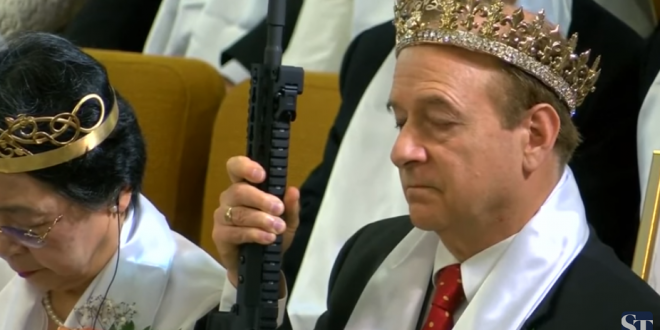 Crown-wearing worshippers clutching AR-15 rifles drank holy wine and exchanged or renewed wedding vows in a commitment ceremony at a Pennsylvania church on Wednesday, prompting a nearby school to cancel classes.

With state police and a smattering of protesters standing watch outside the church, brides clad in white and grooms in dark suits brought dozens of unloaded AR-15s into World Peace and Unification Sanctuary for a religious event that doubled as an advertisement for the Second Amendment.

The church, which has a worldwide following, believes the AR-15 symbolizes the “rod of iron” in the book of Revelation, and encouraged couples to bring the weapons. An AR-15 was used in the Florida high school massacre on Feb. 14.

In an “abundance of caution,” the local school district canceled classes for a nearby elementary school and bused the students to another school about 15 miles away.