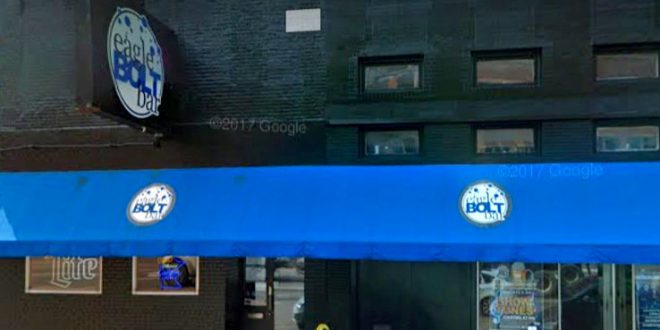 So you’ll have to forgive the Philadelphia Eagles fans in Minneapolis yesterday who stumbled into the Eagle Bolt bar thinking it was a bar for Eagles fans. Instead, it’s Minneapolis’ version of the gay series of bars that have been around for decades.

Owner Ed Hopkins admits he was surprised by the tweets from gay and straight people about the Eagles invasion. “It assumes there is something wrong with realizing you are in a gay bar,” he said, adding. “The people in tonight enjoyed being in our place.”

And his bar didn’t have to worry about any repeat of the scenes Vikings fans endured during the NFC Championship Game – it sounds like the all had a great time.

“The Eagles fans were very rowdy and fun. We enjoyed having them in our establishment.” By the end, Hopkins added, the bar was filled with just as many Patriots fans as Eagles.

The head of a local SEIU live-tweeted throughout.

A good number of #Eagles fans seem to have mistaken the @eagleBoltbar for a fan watering hole. Who will tell them? Not this guy.

Jesus Christ this must be what regular bars are like during a sportsball thing. These @eagleBoltbar @Eagles fans are very excited.

I’m torn about who to root for. I kind of want to see how mad they can get but i also want to live. 🤔

Now pretty certain we will die regardless of outcome. The way these guys are carrying on, you’d think Cher just walked in the room.

My phone is dying. These #Eagles fans are going to need some ambulances. Someone help them. I’m saving myself.

Per sources (@javimorillo) Phildelphia @Eagles fans are mistaking our downtown haunt @eagleBoltbar as a fan bar and I am DYING. It’s more of a Bears kinda place ya’ll. #TheMoreYouKnow

I can confirm a number of Eagles fans here at @eagleBoltbar were drawn by the name. Including a guy from Hamburg, Germany pic.twitter.com/RQvGRfO9Yz