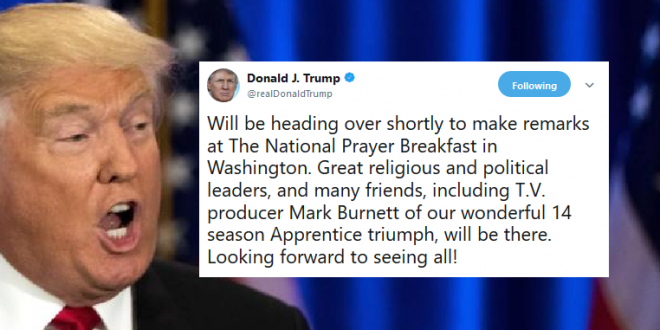 President Donald Trump will attend the National Prayer Breakfast Thursday, a prime networking opportunity for Beltway insiders. But this year’s event is also an opportunity for dozens of Russians. As many as 60 representatives from Russia’s religious and political elite are expected to attend, more than three times last year’s number, according to Russian officials.

One Russian official who was invited, Aleksandr Zharkov, told the Russian business newspaper RBC, “It’s a very unique situation, because despite all these difficulties we have (in relations with the US), the quota for Russians is very high this year.” Added Zharkov, “It is a sin not to use any platform possible for negotiations between different layers of society.”

The spike in the number of Russians attending the event compared to last year comes amid multiple ongoing investigations into possible collusion between the Trump campaign and Russia as well as continued fallout from Russian interference in the 2016 election.

Besides all those Russians, every major anti-LGBT hate group will be in the room.

Previous Shep Smith Mocks Trump’s Military Parade Plan: Just Give Him Some Little Toy Tanks To Play With [VIDEO]
Next Pence Tweets At Gay Olympian: We Are For You