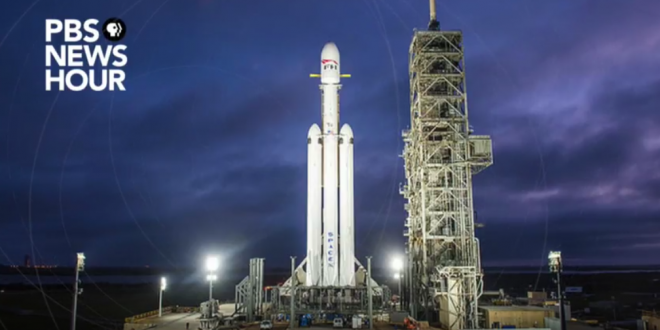 SpaceX’s current Falcon 9 rocket launches cargo to the International Space Station and lofts satellites into orbit. The rocket’s first stages often land to be reused in future launches. The Falcon Heavy is an extreme version of this setup, built to lift more and go further.

What is essentially three Falcon 9 first stages boost the rocket into space, and SpaceX will attempt to land all three of them. Two will set down on land, while the center stage, which will travel further, will land on a floating barge.

The Falcon Heavy will be able to lift more payload than any other American rocket since the Saturn 5, the gargantuan rocket that NASA used for the Apollo moon landings. (The space shuttle also had more liftoff thrust, but less payload capacity, because most of the thrust went into lifting the orbiter.) It is also the first time that a commercial company has developed such a large rocket without any government financing.

The Falcon Heavy will allow SpaceX to bid on missions for the Air Force for some spy satellites that are too heavy for the Falcon 9, and it could be useful to NASA for launching large space probes. Some think it could even serve as a replacement for the Space Launch System, a gigantic rocket NASA is currently developing for carrying astronauts on deep space missions, to the moon and eventually Mars.

I’ll bump up this post closer to launch time.