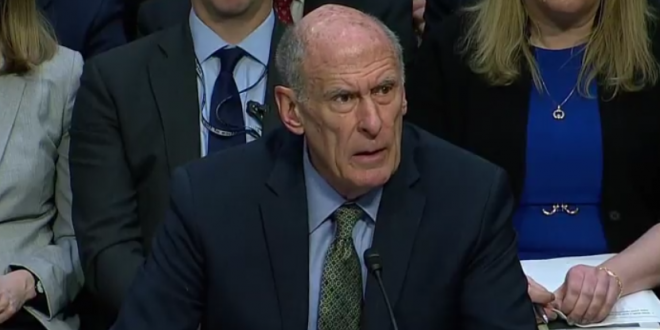 FBI Director Christopher A. Wray is appearing Tuesday morning before a Senate panel, where he is expected to field questions on security clearances for White House personnel and whether he remains confident in the independence of his agents.

Wray is one of six top intelligence agency heads testifying before the Senate Intelligence Committee for its annual worldwide threats hearing, which comes as the White House is seeking to deflect criticism over its handling of a security clearance for a senior aide accused of spousal abuse by saying it relies on law enforcement and intelligence agencies to run the process.

The hearing also comes as the bureau is under fire from President Trump and his GOP allies for its handling of investigations related to Russian meddling in the 2016 election and Hillary Clinton’s use of a private email server.

A new U.S. intelligence report predicts Russia will meddle in this year’s midterm elections as it pursues bolder cyber operations and false information campaigns against America and its allies.

The global threats report issued Tuesday also says the risk of conflict with North Korea is higher today than at any time since the end of the Cold War. So, too, is the rivalry between Iran and Saudi Arabia that’s destabilizing the Middle East. Cyberattacks are on the rise.