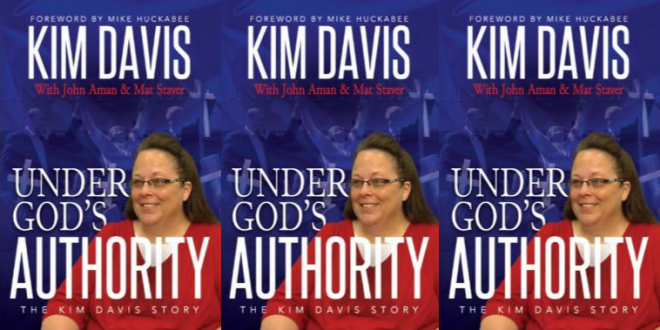 Kentucky County Clerk Kim Davis released her new book, Under God’s Authority: The Kim Davis Story. This true story goes behind the scenes to reveal how God gave this unlikely candidate a platform to defend marriage and religious freedom.

In this amazing narrative of redemption and courage, Davis details her personal experience from the moment Kentucky’s governor ordered the state’s county clerks to issue same-sex marriage licenses, throughout her arrest and release from jail. Former Arkansas governor Mike Huckabee “It’s a great read. But more than that, this remarkable story of what God did in Kim’s life gives me hope for our nation. I think it will give you hope, too.”

“Kim Davis is one tough lady,” said Franklin Graham, CEO of the Billy Graham Evangelistic Association and Samaritan’s Purse. “In a culture that demeans people who obediently follow Jesus, Kim Davis drew on His strength as she experienced—and endured—persecution from the culture, the court, and the crowds, and survived to tell about it all in her compelling book Under God’s Authority. Her story proves that one person can really make a difference when taking a stand for Christ!”

“While the church of Jesus Christ slumbers comfortably in their padded church pews, Kim Davis went to bat for all of us by challenging the seats of political power, going to jail for her faith, and ultimately planting a stake in the ground for religious freedom. My children and I will always admire her,” said Elizabeth Johnston, known as The Activist Mommy. Kentucky Governor Matt Bevin said, “When history called upon Kim, she was both ready and willing to respond. Will the same be said of you?”

The title, of course, is what Davis spat back when a gay couple demanded to know under whose authority she was refusing to issue their marriage license. One of those men is running against her and his campaign donation link is below. (Via Christian Nightmares)

Donate today and help me restore Rowan County for the people. Your contribution will send a message that supports fairness and responsible leadership. We need elected officials who work FOR the people, not against them. https://t.co/5G500CaHOMhttps://t.co/E3UMx0R3Gj

Previous Christian Activist: Maybe Scalia Was Murdered By A 13 Year-Old Boy At That “Pedophilia Ranch” [VIDEO]
Next Things Get Worse For Jailed Pharma Douche