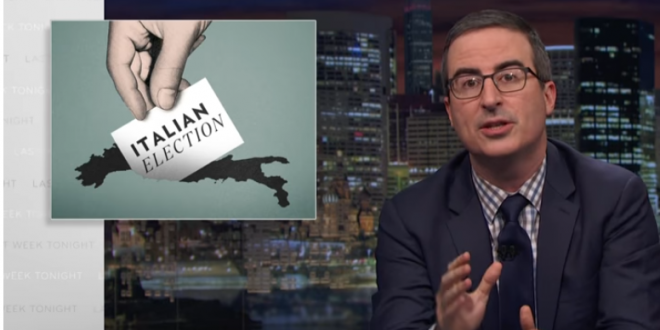 While Oliver isn’t an Italian citizen, he is alarmed by the slate of candidates and the possible repercussions for the world. In fact, Oliver is so concerned that he has jumped into action and consulted lawyers. Turns out that under Italian law the government coalition can pick a non-politician to run.

In fact, they can pick “a random jackass that Italy has never heard of.” Specifically, they could pick Oliver himself. It’s what Oliver calls Air Bud rules, where the rules didn’t definitely say that a dog couldn’t play basketball so “alley oop motherf—-ers.” That’s right, Oliver is running for prime minister of Italy, telling its citizens, “Incredibly, I am far from your worst option.”

The clip is worth your time just for Oliver’s analysis of the rise of fascism in Italy. From yesterday’s New York Times:

The specter of Benito Mussolini returned this month in the form of a poster at Piazza Venezia, the Roman square where more than 70 years ago he fired up the masses with Fascist speeches and stirred a fatal brew of Italian nationalism. The multistory movie poster of Mussolini, a.k.a. Il Duce, head bald and arms akimbo, advertised “I’m Back,” a satirical film imagining the dictator’s return to modern-day Italy.

In many ways, the poster symbolized the debate on Mussolini — or at least the violent nationalism that fueled his rise — that has returned with force to the country as critical elections loom on March 4. The re-emergence of extremist violence, harassment and xenophobia has gripped Italy and forced the country to reckon with the hard-right and fascist ideologies fueled by a lingering financial crisis and migration.