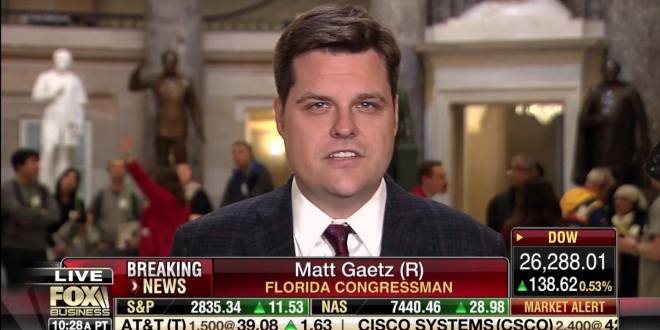 GOP Rep. Matt Gaetz: That Troll I Invited To SOTU Is Totally Not A Nazi And I Don’t Really Know Him Anyway

“I met Chuck just briefly before allowing him to snag a ticket that was at our office, but some of the claims against Mr. Johnson are not accurate. He’s not a holocaust denier, he’s not a white supremacist, those are unfortunate characterizations of him but I did not know he was as perhaps infamous and controversial as he was when he came by and got a free ticket.

“He is not guilty of the things that some people have charged him of as it relates to those claims. Look, he’s a controversial figure, there were plenty of controversial folks at the State of the Union, I don’t just cavort with people who hold my views, I think there are people on the right and on the left who you spend time with, learn more about, understand their viewpoint.” – GOP Rep Matt Gaetz, speaking today on Fox Business.

As I reported yesterday, Gaetz’s guest at the SOTU was infamous “Rage Furby” troll Chuck C. Johnson, whose crowdfunding site has raised money to defend Nazi leader Andrew Anglin and other far-right extremists. Johnson was banned from Twitter in 2015 after soliciting donations to “take out” Black Lives Matter activist DeRay McKesson.