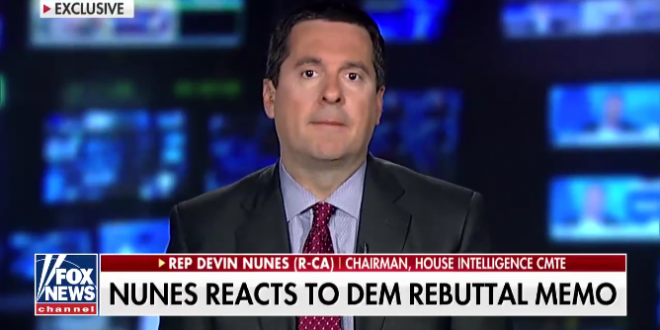 A day after the Democratic rebuttal memo was released that claims to rebuke the findings of the Nunes memo, Rep. Devin Nunes (R-CA) appeared on Fox & Friends to slam the Democrats’ document while insisting that the Steele dossier was the main impetus of the Russia probe. He also used the Fox News interview to smear the media. “The one thing that’s clear in this whole Russia fiasco is that the media’s dead,” Nunes said, adding that he wanted to “apologize to you guys that are in the media.”

He continued, “The media in this country, the fair and balanced media is for the most part — I mean 90 percent of them are hard left. They rely on clicks to make a living. So when they attack people like me, it actually means that I’m over the target, and I’m getting to them because they have to attack me in order, number one, to please their masters, their billionaire masters, and number two, they also have to do it because they’re in on this.”

.@DevinNunes: “The one thing that’s clear in this whole Russia fiasco is that the media is dead.” https://t.co/tt9RB2bgAS pic.twitter.com/pBGhx3AGd3