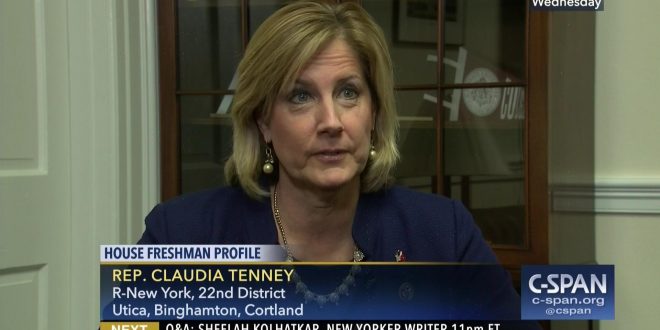 A Republican congresswoman from upstate New York said Wednesday that “many” people who commit mass murder turn out to be Democrats. Rep. Claudia Tenney made the remarks on Talk 1300 Radio during a discussion about calls for stricter gun control since last week’s deadly Florida high school shooting.

“Yeah, well, obviously there is a lot of politics in it, and it’s interesting that so many of these people that commit the mass murders end up being Democrats, but the media doesn’t talk about that either,” Tenney told talk show host Fred Dicker. Tenney did not offer any evidence to support that statement.

In a statement Wednesday night, Tenney said her comments were taken out of context. “I am fed up with the media and liberals attempting to politicize tragedies and demonize law-abiding gun owners and conservative Americans every time there is a horrible tragedy,” she said.

Previous FLORIDA: State House Approves Dem’s Bill Requiring All Public Schools To Display “In God We Trust” Motto
Next Reuters: McMaster And Kelly Might Be Quitting