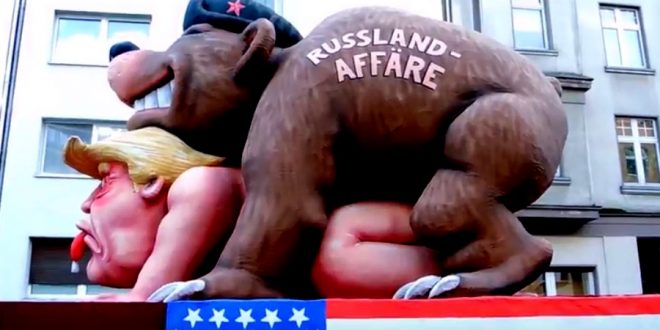 Germany is celebrating its annual Rose Monday carnival in traditionally satirical fashion: with floats that feature huge, unflattering puppets of politicians. US President Donald Trump is the focus of much of the rude humour this year. A float in Düsseldorf depicts a naked Donald Trump being shafted by a gigantic brown bear with the slogan “Russia scandal” written across its side.

One float at the Rose Monday parade in Mainz depicts North Korean leader Kim Jong-un and US President Donald Trump in their underwear and comparing the size of their missiles. Another shows the US President taking aim at the Paris climate agreement with a golf club. Theresa May is the target of a satirical float in Düsseldorf. The British Prime Minister is depicted giving birth to a horrific, misshapen Brexit baby.

#Rosenmontag – just a few of the pictures of Carnival Floats posted on Twitter today. Political satire is alive and kicking in Germany. pic.twitter.com/30gaKVqTJL

really enjoying this year’s #Karneval floats in Germany. as you can imagine, very political this year… “Selber Schulz” = “His own fault”: the SPD’s Martin Schulz is seen sending himself through a meat grinder here with a clever play on the word Schulz #RosenMontag pic.twitter.com/12921XFo81

Another #Rosenmontag float has North Korean leader Kim Jong-un and US President Donald Trump in their underwear, comparing the size of their missiles: https://t.co/l8EdBA7NhG pic.twitter.com/qHxEHNYm5w