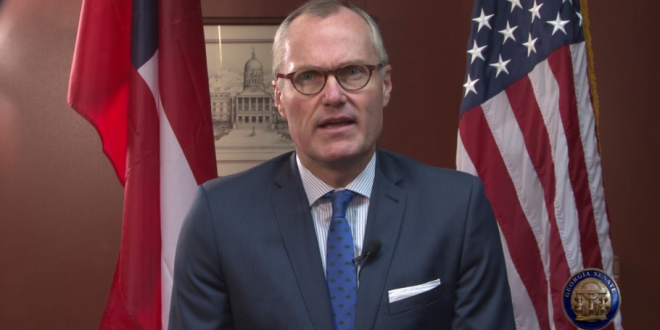 GEORGIA: Republicans Block Tax Break For Delta Until They Again Give Discounts To NRA Members [VIDEO]

The Georgia Senate blocked a lucrative tax break bill on Monday that would benefit Delta Air Lines after the Atlanta-based company severed ties with the National Rifle Association. Lt. Gov. Casey Cagle [photo] said he would not support tax legislation that helped the airline “unless the company changes its position and fully reinstates its relationship with the NRA.”

He echoed a growing number of conservatives who opposed the measure over the weekend. Delta, which has been based in Atlanta for nearly 80 years, is Georgia’s largest private employer, with 33,000 workers statewide and $300 million in state and local tax revenue annually, according to the company.

Delta announced Friday that it had told the NRA it would be ending a program that gave discounted fares to the group’s members and asked the NRA to remove Delta information from its website. Dozens of corporations have done the same, many acknowledging the comments from customers and on social media as being behind their decisions.

The GOP holds a 2-1 majority in the Georgia Senate.

I will kill any tax legislation that benefits @Delta unless the company changes its position and fully reinstates its relationship with @NRA. Corporations cannot attack conservatives and expect us not to fight back.