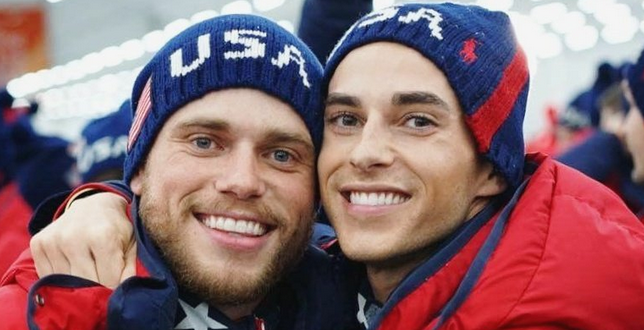 Figure skater Adam Rippon and skier Gus Kenworthy made history on Friday as the two first openly gay U.S. athletes to qualify for the Winter Olympics. And the significance of marching with the massive Team USA at the opening ceremony in PyeongChang isn’t lost on the Olympians. The pals shared several Twitter shots of themselves at the ceremony, embracing and sporting smiles. Kenworthy even planted a kiss on Rippon’s cheek. “We’re here. We’re queer. Get used to it,” Kenworthy tweeted after the event.

Tonight I walked in the #OpeningCeremony and got to watch my old friend @Yunaaaa light the Olympic flame. Representing the USA is one of the greatest honors of my life and being able to do it as my authentic self makes it all so much sweeter 🇺🇸🏳️‍🌈🏆🌎❤️🔥 pic.twitter.com/ZypvWkUBjD