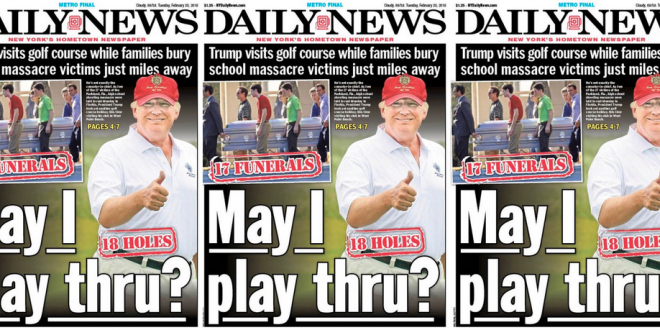 Just 45 miles from where the mournful families broken by the latest school shooting laid their loved ones to rest, the President of the United States slipped on a white polo shirt, put a matching white cap on his head and set out for the golf course.

The President arrived at the Trump International Golf Club in West Palm Beach shortly after 9 a.m. Monday, and was there two hours later as 14-year-old Alaina Petty’s friends and family filled a Coral Springs Church and talked about her smile.

Alaina was one of 17 students and staff gunned down in the Parkland, Fla. massacre Wednesday when a former student armed with an assault rifle stormed the school, pulled a fire alarm and picked off teens and teachers as they filled the hallways.