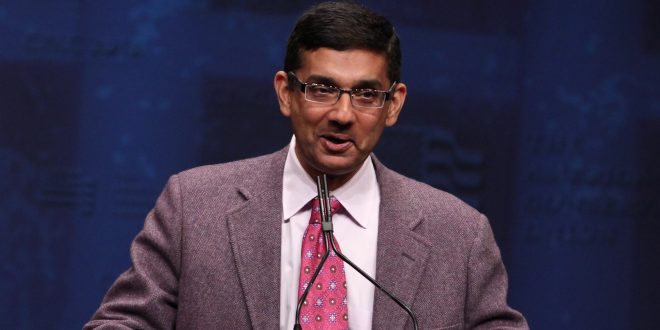 After Dinesh D’Souza’s disgusting tweets going after teenage survivors of a school shooting, people genuinely wondered if D’Souza was lined up to speak at CPAC this week. The organization says he is and was not. The Speakers page has D’Souza’s photo on it, but CPAC’s Twitter account says that’s from the archives, they’re taking it down, and his comments are abhorrent.

D’Souza is accused of taunting survivors of the Stoneman Douglas massacre after he posted multiple tweets responding to Florida lawmakers voting down a ban on assault rifles. His tweet read “Worst news since their parents told them to get summer jobs,” accompanied by a picture of students reacting to the news of the ban.” An hour earlier, he tweeted “Adults 1, kids 0” as the news was breaking of the ban being denied. D’Souza was met with immediate disapproval from those objecting to the mockery of survivors of a mass shooting.

Hey @ACUConservative might want to cancel @DineshDSouza at CPAC right about now.

Will you draw a line at one of your speakers openly mocking child survivors of Florida school shooting? #CPAC2018 pic.twitter.com/zmpBayIFrh

Hey Rafael, this is #FakeNews. @DineshDSouza is not a speaker at #CPAC2018. You are seeing an archived speaker profile and we are taking down his archived picture. His comments are indefensible. https://t.co/k5mhN639JI

It’s most certainly not #FakeNews… you had him listed as a speaker, and just because you’re backtracking doesn’t mean you didn’t have him listed when they posted this.

The well ORGANIZED effort by Florida school students demanding gun control has GEORGE SOROS’ FINGERPRINTS all over it. It is similar to how he hijacked and exploited black people’s emotion regarding police use of force incidents into the COP HATING Black Lives Matter movement. pic.twitter.com/XDZ3bcwF6F