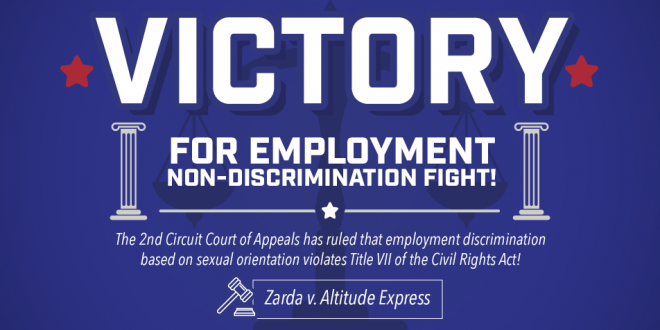 Under Donald Trump and Jeff Sessions, the U.S. Justice Department has been wielded as a weapon of injustice, arguing that employers should be able to fire people simply because of their sexual orientation or gender identity. But despite the Trump administration’s best efforts, the LGBTQ community and their allies have prevailed in federal court today.

This is a major victory for anyone who believes in the promise of full equality for all Americans, and a massive blow to Republican leaders and lawmakers standing in the way of progress. Democrats are proud to stand shoulder to shoulder with our brothers and sisters in the LGBTQ community, and we will always fight to end discrimination in all its forms.

This strong affirmation that sexual orientation is protected under Title VII is a vital step forward, but it is imperative to continue to fight for the courts to affirm gender identity is also protected by denying the Trump Administration attempts to block the transgender community from having standing under the language of sex discrimination.

Much like their attempts to undermine protections for workers based on sexual orientation, the Trump Administration has been working to write an anti-trans interpretation of sex discrimination into law by denying that gender identity is protected under the Civil Rights Act. In October 2017 Jeff Sessions reversed a federal policy that interpreted Title VII to include protections for the transgender community on the basis of sex.

Today’s opinion is a huge victory in the fight for equality and fairness for all LGBT workers,” said Greg Nevins, Director of Lambda Legal’s Employment Fairness Project. “At Lambda Legal’s urging, another federal court of appeals has recognized that federal law protects LGBT people from discrimination because denying someone the right to a job because they are attracted to someone of the same sex is a form of sex discrimination, plain and simple. We will continue pushing this issue until every LGBT person in this country benefits from the protection that our federal law provides by its plain terms against discrimination because of a person’s sex, including their sexual orientation.”

From Freedom For All Americans:

Today’s ruling is the latest victory affirming that employees should be evaluated only on their work ethic and job performance – not on who they are or who they love. Courts across America are increasingly in agreement that who a person loves has no impact on what they produce in the workplace, and no one should be singled out because of their sexual orientation.

Freedom for All Americans is proud to stand shoulder-to-shoulder with the attorney and legal organizations that made today’s win possible. Momentum is on our side, but we must continue doing the work of winning in both the courts and state legislatures. Our job isn’t done until the patchwork of different state laws is ended and all people are uniformly protected from discrimination, no matter what zip code they call home.

Today’s decision is a victory for lesbian, gay, and bisexual workers across the country. There have now been two federal appeals courts to recognize what we’ve always known — that discrimination based on sexual orientation is in fact discrimination, and that there is no room for it in the workplace. This decision is also a repudiation of the Trump administration’s Justice Department, which has insisted that LGBT discrimination is acceptable under federal law.