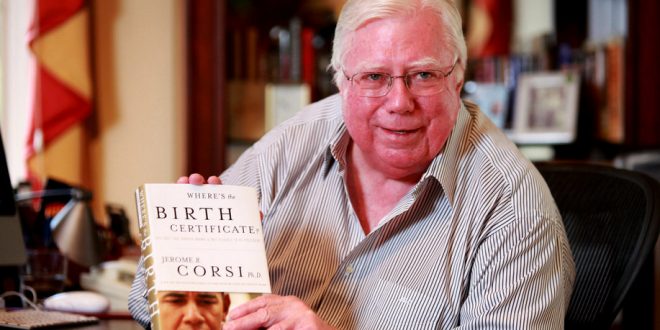 Christian Activist: Maybe Scalia Was Murdered By A 13 Year-Old Boy At That “Pedophilia Ranch” [VIDEO]

World Net Daily columnist, racist birther, and 9/11 truther Jerome Corsi, who is also a regular on InfoWars, has a new explanation regarding the death of Supreme Court Justice Antonin Scalia.

“The story is a pedophilia ranch,” Corsi said, “a boy ranch for elite to go on these so-called hunting trips and have sex with young children, with young boys. That story that is being circulated—and with some, again, evidence that can’t be dismissed out of hand, that has to be investigated—that there was an incident with a 13-year-old boy, the story is, and it will mean that Scalia was involved in pedophilia, and it didn’t go well and the kid cut his throat and killed him and was then disposed in a bad sex incident.” “We don’t have proof of this,” Corsi added. “We are not saying it’s true, we are not saying this is how it happened, but if you are investigating, you have got to answer certain questions, again, that don’t fit together.”

My book KILLING THE DEEP STATE: THE FIGHT TO SAVE DONALD TRUMP is now in pre-publication sales at https://t.co/fA7fCj1W8N and https://t.co/oIuNHslwsk PUBLICATION DATE: March 13 – I will begin media on this book in the next few days. @realDonaldTrump https://t.co/pVCompw9uz pic.twitter.com/bxAnez0r06