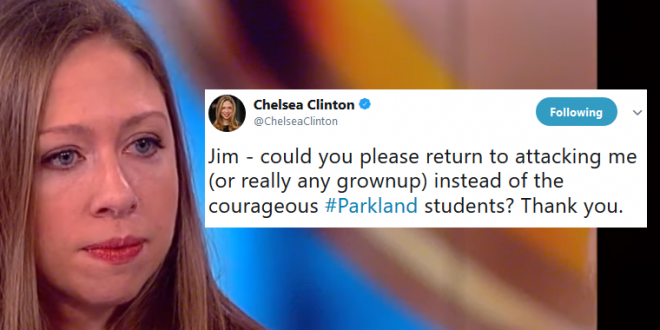 Last night Chelsea Clinton fired back at Jim Hoft, the homocon founder of the fake news site Gateway Pundit, who is part of the now-widespread right wing attacks on the survivors of the Parkland massacre.

Hoft is taking particular aim at “astonishingly articulate” Parkman survivor David Hogg, whom Hoft accuses of having been “coached” by his retired FBI father because “the FBI is only looking to curb YOUR Constitutional rights and INCREASE their power.” (No link because fuck that guy.)

Hoft and several others are currently being sued in federal court for falsely naming a Michigan teen as last year’s killer Nazi in Charlottesville.

Jim – could you please return to attacking me (or really any grownup) instead of the courageous #Parkland students? Thank you. https://t.co/t8ngiLllS6