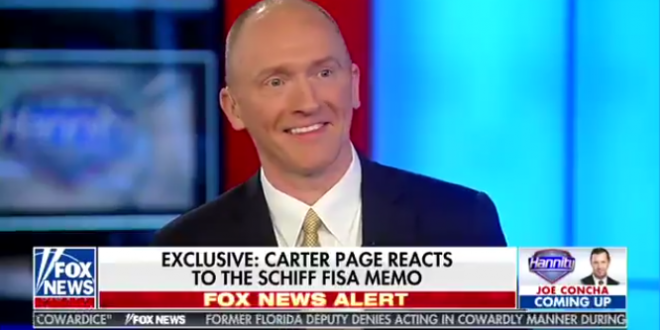 Former Trump campaign aide Carter Page praised Fox News host Sean Hannity for his coverage regarding the Russia investigation. “You have been the Edward R. Murrow of this whole process,” Page told Hannity during an interview late Monday. “It’s been so completely out of control, going back, really a year-and-a-half now.”

Hannity, a strong support of President Trump, asked Page whether the media and Rep. Adam Schiff (D-Calif.), the top Democrat on the House Intelligence Committee, have lied to Americans. “It’s been nonstop, absolutely,” Page said.

Carter Page to Hannity: You are the Edward R Murrow of the Trump/Russia Story pic.twitter.com/6XnNkn5Myu

Previous Jimmy Fallon Hails Parkland Students: This Is A Real Revolution And I Will March With You In DC [VIDEO]
Next Priest Arrested For Sex With Underage Boys [VIDEO]