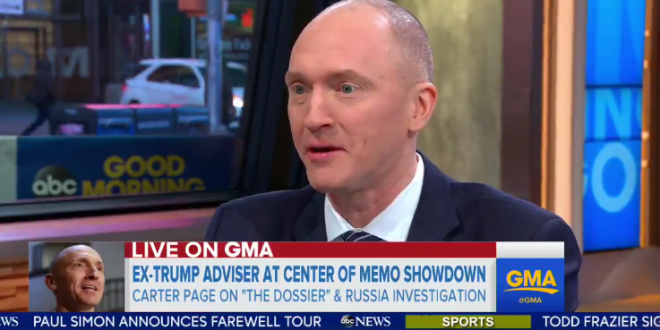 Carter Page, the former foreign policy adviser to President Donald Trump’s campaign now at the center of the ongoing Russia investigation, told ABC’s “Good Morning America” on Tuesday that he has never in his life communicated with the president.

Page mostly continued his habit of dodging questions about his connections to Russia. As he has before, Page denied one of the key points of Steele’s dossier, which is that Page had a secret meeting with a Russian oil executive, a close ally to Russian President Vladimir Putin, about possibly lifting sanctions against the country. Trump officials have consistently tried to downplay Page’s role in the campaign.

Page explained a number of his past run-ins with the FBI, before the ABC News anchor stepped in to remind Page that he once wrote that he served “as an informal adviser to the staff of the Kremlin.”

“So you were recruited at one point by a Russian agent, then you wrote yourself that you were an informal adviser to the Kremlin. So that does lead people to believe: ‘is this guy working with Russia?’”

“These are your words,” Stephanopoulos pressed after Page dismissed his own past comments. “You’re advising the Kremlin.”

Carter Page’s defense for that 2013 letter where he said he was an informal adviser to the Kremlin? Page: “There was a lot of people advising” the Kremlin. (via ABC) pic.twitter.com/l26iUyrkfx

This video was shot from Russian Gov’t run propaganda TV station RT in Moscow, in December of 2016. #TrumpRussia pic.twitter.com/sC0KHCUFja

Previous Trump’s Lawyers Advise Against Mueller Interview, Worry He Could Be Charged For Lying To Investigators
Next Court Refuses To Quash Warrant For Assange’s Arrest