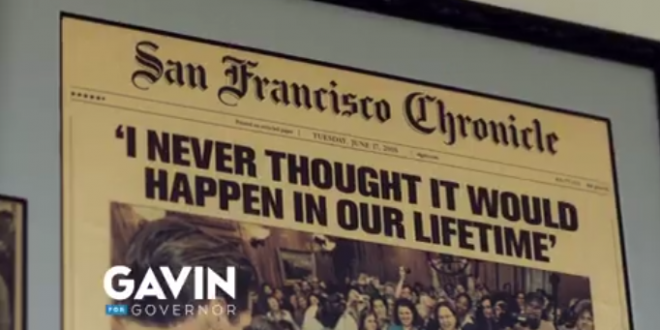 Lt. Gov. Gavin Newsom, who sits atop most polls and has raised the most money in the 2018 California governor’s race, begins spending some of it Monday with his first campaign ad. It features the then-San Francisco mayor presiding over the first same-sex marriages in the city on this day 14 years ago.

“Today, we can confidently say, is the first day in the state of California that we are providing marriage equally and fairly to everyone and denying no one their right and their opportunity to live their lives out loud,” Newsom says in a 2004 clip near the start of the minute-long ad that was posted to his Facebook page at 6 a.m. Monday. It will become Newsom’s first TV commercial this spring, campaign officials said.

Leading with the issue that vaulted Newsom into the national spotlight, and releasing the ad on the anniversary of the Winter of Love marriages in San Francisco, is a sign that Newsom will try to shape the campaign around his leadership on controversial issues.