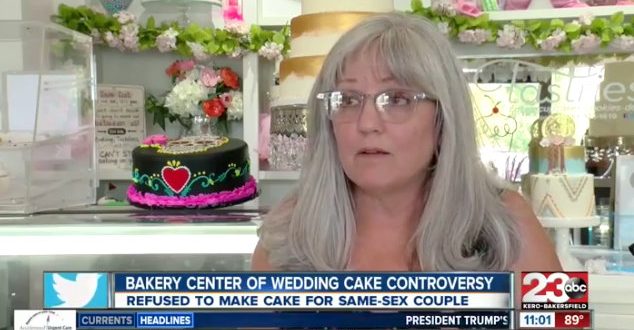 Lampe wrote that his ruling was tied closely to the fact that Miller was being asked to create a cake for an event. And he cautioned that religion does not give businesses a right to refuse service to groups protected by the Unruh Act in other circumstances.

“A retail tire shop may not refuse to sell a tire because the owner does not want to sell tires to same sex couples. There is nothing sacred or expressive about a tire. No artist, having placed their work for public sale, may refuse to sell for an unlawful discriminatory purpose. No baker may place their wares in a public display case, open their shop, and then refuse to sell because of race, religion, gender, or gender identification,” Lampe wrote.

When the case first made the news last year, Miller said this to a local outlet: “Our business is God’s business, we work for him. I shouldn’t be picked on because of my beliefs.”

No word yet as to an appeal. Meanwhile we continue to await the Supreme Court’s decision in the Masterpiece case.