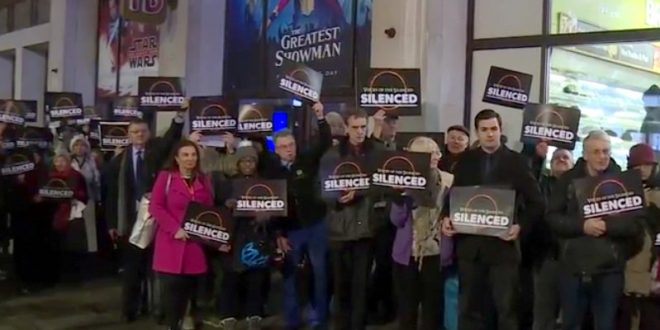 Dozens of protesters have gathered outside a London cinema to protest against the cancellation of a screening of a film advocating therapy to “cure” people from being gay. Christian group Core Issues Trust hired a screen at Vue Piccadilly, in the West End, to show its film – the Voices of the Silenced.

But the cinema cancelled the event at the last minute, saying it contradicted the company’s values. Protesters accused Vue of censorship. According to the film’s makers, the documentary tells the stories of 15 people “emerging out of homosexual lifestyles” and aims to “preserve and promote teachings on sexual ethics”.

Andrea Williams, chief executive of Christian Concern, an organisation which wants to see the UK “return to the Christian faith”, said the Vue’s decision to cancel had been “tragic and disproportionate”. “This is a freedom issue,” she told the BBC. “This film is the stories of lives that are transformed, marriages saved, fathers who stay fathers. There is nothing wrong with saying I don’t want to do that any more. I want to access therapy to help me live in a different way,” she said.

Previous Philippine Strongman Tells Court He’d Rather Face Firing Squad Than Imprisonment For Crimes Against Humanity
Next Chaffetz: The GOP Spending Bill Show Republicans Have Lost All Credibility On Debts And Deficits [VIDEO]