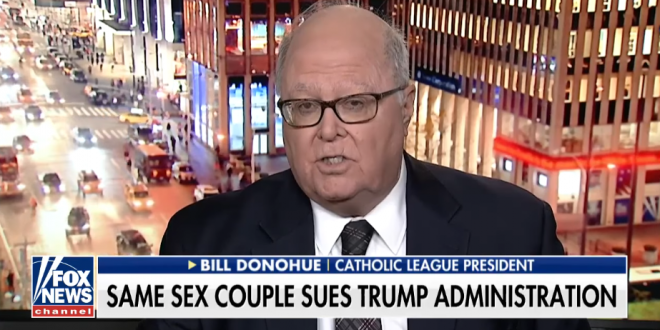 “It’s a matter of gay bullying and harassment,” said Catholic League President Bill Donohue on Wednesday night’s “The Ingraham Angle.” “They’re gay activists. They are trying to shove their secular values down our throats,” he added. “Secular militants [are] trying to shove their way in and basically neuter Catholic institutions.”

The case involves a lesbian couple that is suing the federal government and a Catholic organization because it funds a charity that does not permit same sex couples to foster refugee children. Fort Worth married lesbian couple Fatma Marouf and Bryn Esplin allege that Catholic Charities of Fort Worth (CCFW) denied them the opportunity to foster a refugee child based on their sexual orientation.

In response, the women, both professors at Texas A&M, filed suit in district court on Tuesday, naming United States Conference of Catholic Bishops (USCCB) and the Department of Health and Human Services’ (HHS) Office of Refugee Resettlement (ORR) as defendants.