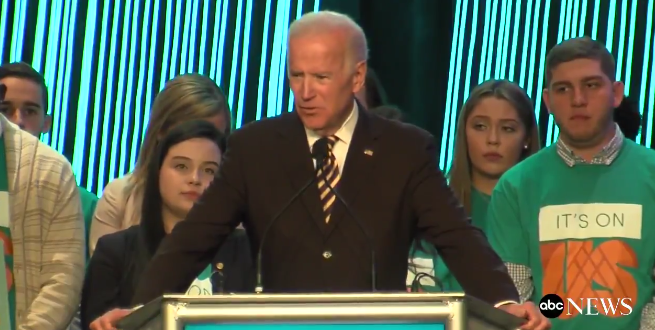 Former Vice President Joe Biden reacted to comments made today by President Trump about the outgoing White House aide accused of domestic abuse by two ex-wives. During a speech in Indiana talking about sexual assault, Biden read the statement from Trump that, while not mentioning the victims, did say the White House wishes Porter well. The former VP said, “That’s like saying that axe murderer out there––he’s a great painter.”

Joe Biden responds to Pres. Trump’s comments on Rob Porter: “Is there any other crime—and it’s a crime—where there’d be an explanation, that the reason why we shouldn’t pay attention to the transgression is because they’re good at something?” https://t.co/1h9gdwyx57 pic.twitter.com/UPi5NAS3yi

Not a word, not even a thought for the women Porter is accused of physically and verbally abusing.

What’s “sad” is having a complete moral vacuum in the Oval Office. Domestic violence is evil, and there aren’t “both sides” on this issue. Real leaders stand with survivors, not perpetrators.

Instead of offering sympathy to the women who’ve come forward alleging abuse, Trump wished Porter well & pointed to his claims of innocence. At this point, it’s hard to come up w/ new ways to express total dismay for @POTUS’s appallingly unpresidential remarks & actions in office

If @rihanna is dating @chrisbrown again then she has a death wish. A beater is always a beater–just watch!

Previous Fox Deletes “Unvetted” Column By VP Which Claimed US Olympic Motto Should Be “Darker, Gayer, Different”
Next One Million Moms Vs Walgreens