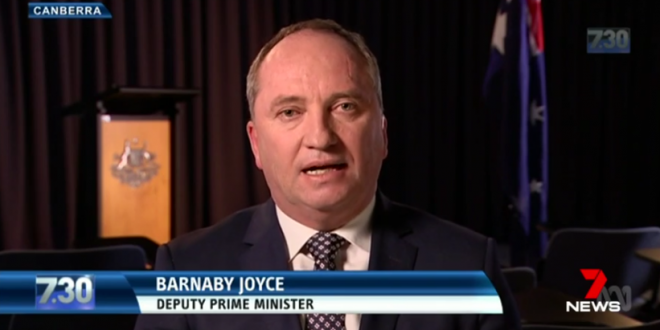 He’s the man who strongly opposed gay marriage, arguing it was against traditional family values. Now it’s been revealed Deputy Prime Minister Barnaby Joyce is expecting a baby with his former staff member, after leaving his wife of 24 years.

Mr Joyce’s former wife, Natalie, said she was “deeply saddened” by the affair given her husband’s former media adviser-now live-in girlfriend Vikki Campion had been a welcome visitor to the family home. “This affair has been going on for many months and started when she was a paid employee,” Mrs Joyce said in a statement.

Gay rights campaigner Rodney Croome unloaded both barrels on the “hypocrite” deputy prime minister, who vehemently opposed same-sex marriage and demanded the issue be put to a national vote. “You can’t put the lives of tens of thousands of your fellow citizens under the microscope and then expect to avoid scrutiny yourself,” Mr Croome said.

He argued the scandal exposed what “traditional marriage” meant for people like Mr Joyce. “It is not a set of standards for heterosexual couples to live up to. It is a euphemism for prejudice against LGBTI people and our exclusion from the core institutions of society,” Mr Croome said.