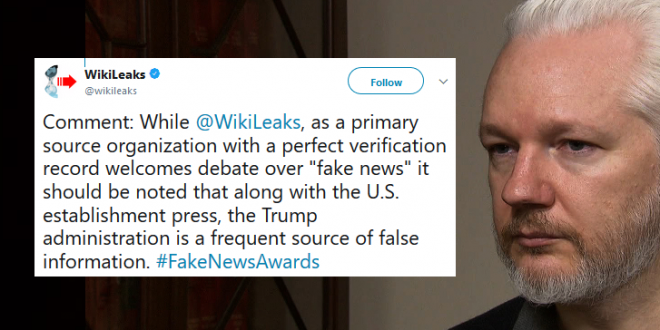 WikiLeaks has hit out at the White House as a source of false information following Donald Trump’s so-called Fake News Awards. The awards, which were announced on Wednesday evening (and saw Newsweek take a very respectable eight place), singled out The New York Times, ABC and CNN for the top spots—but WikiLeaks took the time to remind Trump that his own administration was a “frequent” source of fake news.

After having a dig at Trump’s White House, WikiLeaks then went on to share a number of stories it believed had been contenders for the awards. The awards themselves have been slammed not only among members of the press, but by those concerned that the “fake news” awards link led people to the site of the Republican National Committee; which presumably should have more on its mind than who has, or has not, criticized the president.

Comment: While @WikiLeaks, as a primary source organization with a perfect verification record welcomes debate over “fake news” it should be noted that along with the U.S. establishment press, the Trump administration is a frequent source of false information. #FakeNewsAwards