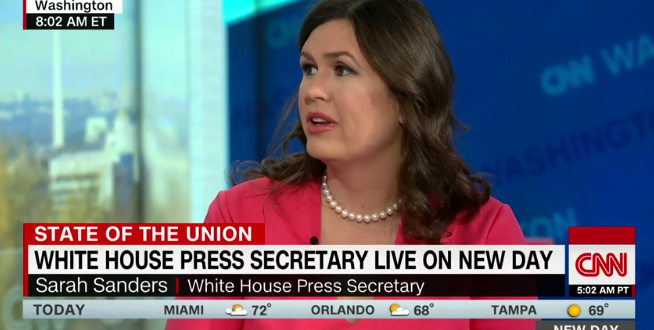 Wednesday interview with Sarah Huckabee Sanders prompted women to take to Twitter and call out the White House press secretary for embracing the sexist trope that women should smile more. During the interview with Chris Cuomo, Sanders called out Minority Leader Nancy Pelosi and said that she should “smile more.” The demand is often referenced by women as a demand primarily made by men to look pretty and feel what they want them to feel.

“I think she should smile a lot more often. I think the country would be better for it.

“She seems to kind of embody the bitterness that belongs in the Democrat party right now.” https://t.co/D5tPejUkT7

Sarah Sanders thinks Pelosi “should smile a lot more often”??? Because… you know… women who smile are more attractive and nice to be around.
What a backwards bunch of misogynistic crap. https://t.co/xDifmemMvV

Sarah Sanders telling Nancy Pelosi to smile more is just the embodiment of everything wrong with the GOP.

“There was no code. The President could not have been more clear”: Press secretary Sarah Sanders responds to argument that Trump demonized DACA recipients when discussing illegal immigration during State of the Union address https://t.co/U20bMHQErx

Press secretary Sarah Sanders calls the probe into potential collusion between the Trump campaign and Russia “a total hoax” and “a waste of taxpayer money,” but says the White House wants to see it through https://t.co/OXCi4YPrgm

White House press secretary Sarah Sanders: I think Nancy Pelosi “should smile a lot more often … she seems to kind of embody the bitterness that belongs in the Democrat party right now” https://t.co/eFCFTiHAT1