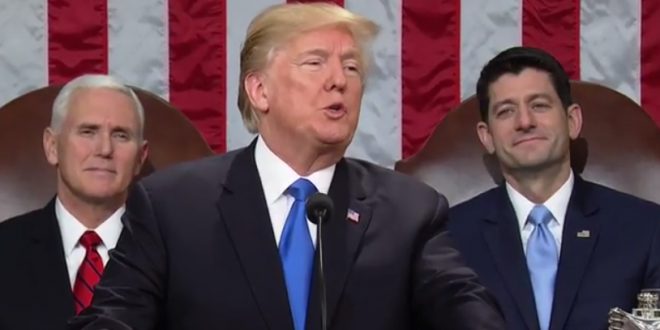 Have a president’s words ever rung more hollow? In his first State of the Union address Tuesday night, President Trump spoke of “what kind of nation we are going to be. All of us, together, as one team, one people and one American family.” Yet Mr. Trump could not avoid, even for an hour, lacing his address with divisive references to hot-button issues and graceless attacks on his predecessors: to “disastrous Obamacare,” “the mistakes of past administrations,” “the era of economic surrender” and more.

His desire for bipartisanship has not led him to negotiate with Democrats in good-faith on health care, taxes or immigration. His search for unity did not stop him Tuesday from taking a gratuitous dig at football players who kneel during the national anthem. As he took a victory lap on the economy, Mr. Trump displayed his typical indifference to the truth, claiming he “enacted the biggest tax cuts and reforms in American history.” They are not.

Thank you President Trump. Americans are “Dreamers” too.

“Americans are dreamers too” is why President Trump is so remarkable. It shifts focus from a small group to the whole nation.

“Americans are dreamers, too.”