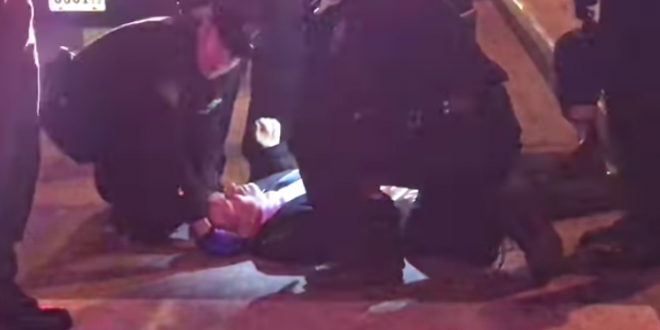 A supporter of President Trump who had attended an alt-right Manhattan celebration of the anniversary of the inauguration was attacked by a protester Saturday night, police said.

Several hundred people had bought tickets for the gathering at a nightclub at West 50th Street and 12th Avenue — which featured right-winger Mike Cernovich and which was, oddly, crashed by transgender Wiki-leaker Chelsea Manning.

About 80 anti-Trump protesters marched outside. A contingent of some 60 cops set up barriers between the two groups. When the event broke up, a protester followed a Trump supporter, punching and choking him a block away, police said.

Far-right provocateur Mike Cernovich was inside the event at the FREQNYC nightclub on W. 50th St. when the fisticuffs broke out about 10:30 p.m. “I saw him hit the old man,” said witness Ali Thomas, 24. “One hit. He swung hard. He hit him hard. The old man’s head hit the curb.”

Cernovich later emerged from the event and confronted a group of demonstrators. “These guys are f—–g terrorists,” Cernovich said. The Night for Freedom event — billed as a “gathering of patriots and political dissidents who are bored with mainstream political events” — featured a comedy routine, speeches and a deejay set.

Antifa spotted me walking outside @Cernovich Night for Freedom, had me surrounded, bypassed NYPD, started to charge, had to turn phone off as was trapped in violent mob for 10 minutes w a few cops escorting me to car, jumped into backseat of @ImAndrewMarcus car. @JackPosobiec pic.twitter.com/MD2KDYLxmM

Yes I literally shook hands with Chelsea Manning tonigut, the left is freaking out, it was not a big deal. It was a huge and amazing party. Glad she stopped by. All are welcome to party with me.

Did you really think you were going to stop me? I will out spend, out fight, and out party you. pic.twitter.com/o3H99VZwMp