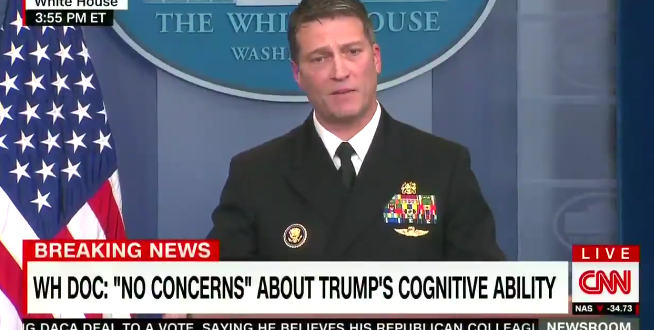 President Donald Trump asked the White House doctor to perform a cognitive exam during his physical last week, despite the doctor’s determination that such testing wasn’t necessary. “I have no concerns about his cognitive ability,” Dr. Ronny Jackson told reporters on Tuesday. He said the testing was conducted at the President’s wishes, and the results were normal.

Ahead of the exam, the White House said that tests for mental acuity would not be included. The question arose after a week of speculation about Trump’s mental fitness for office, spurred by the publication of a damaging book that suggested Trump’s own aides worry about his stability. Later, Trump attempted to clarify matters by tweeting he was a “very stable genius.”

“The president’s overall health is excellent,” Jackson said. “His cardiac performance during his physical exam was very good, he continues to enjoy the significant, long-term cardiac and overall health benefits that come from a lifetime of abstinence and alcohol.”

Jackson said Trump could stand to lose 10 to 15 pounds and improve his diet. The 6’3″, 239 pound president is one pound away from being considered obese under a scale used by the Centers for Disease Control.

Trump’s doctor: “I can promise there is nothing that I am withholding from you” pic.twitter.com/f5WyI4yFi3

Trump’s doctor on his good health despite his diet: “It is called genetics” pic.twitter.com/oYquT9EQkP

Trump’s doctor: “I would say based on his cardiac assessment, hands down, there is no question that he is in the excellent range for his age from a cardiac standpoint. That’s not me speaking. That’s objective data” pic.twitter.com/xPVp8Dxx1e

White House doctor says despite President Trump’s fast food habit and lack of exercise, he’s in “excellent” condition, “he has incredibly good genes, and it’s just the way God made him.” https://t.co/NsTmll8Dpj pic.twitter.com/0RlLogiQ3p

White House doctor: “Absolutely” Trump is fit for duty — for this term, and a possible second term. https://t.co/7GaIc0oDxq