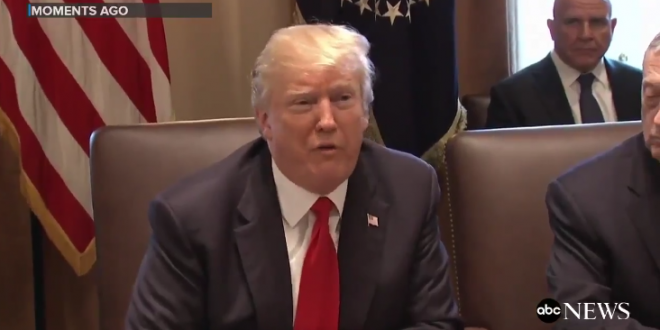 President Donald Trump said on Wednesday that his administration will examine whether U.S. libel laws can be strengthened after a new book questioned his mental fitness to serve as president.

“Our current libel laws are a sham and a disgrace and do not represent American values or American fairness so we’re going to take a strong look at that,” he told reporters as he met members of his Cabinet.

“We are going to take a strong look at our country’s libel laws so that when somebody says something that is false and defamatory about someone, that person will have meaningful recourse in our courts,” Trump said.

Trump also bragged about how allowing the media to film his bipartisan immigration negotiations yesterday with several members of Congress. The discussions drew rare praise from his critics and complaints from his base. Naturally, Trump was more focused today on the former.

“It was a tremendous meeting, actually. It was reported as incredibly good, and my performance…got great reviews from everybody other than two networks who were phenomenal for about two hours. Then after that they were called by their bosses who said “oh, wait a minute” and unfortunately, a lot of those anchors sent us letters saying that was one of the greatest meetings they’ve ever witnessed.”

After complaining on Saturday that Michael Wolff couldn’t have written Fire & Fury if libel laws were stronger, Trump officially announces at his cabinet meeting the administration is “going to take a strong look” at overhauling libel laws. pic.twitter.com/eVTSGAnG3w

Pres. Trump promises “to take a strong look at our country’s libel laws,” calling current laws “a sham and a disgrace, and do not represent American values.” https://t.co/AlUzhGxZwO pic.twitter.com/b0oGLS25N9

He also says he received letters from news anchors praising him (he does not specify who) pic.twitter.com/PTRarazQqA

Donald Trump saying he wants to take a strong look at libel laws so people cannot say false things is as ridiculous as Melania’s anti-bullying campaign and OJ’s hunt for the real killers combined.

If Trump were a genius, he'd know that tougher libel laws would apply to OTHER PEOPLE who could sue him, and this would not be good for him because he is unable to control him mouth.

The inherent stupidity is maddening; he is too ignorant to know he's ignorant. https://t.co/jNjXAT5a3z

If Trump succeeds in loosening libel laws, Obama should show up to the bill signing and serve him with a lawsuit for his birther crap.

Trump has repeatedly threatened changes to libel laws, or to revoke media licenses, or to sue to stop publication of material that critiques him. In Turkey, Erdogan targets critical media in similar ways—threats and targeting profits—to undercut critical press outlets. https://t.co/OnzotYH7J2

I forget who said it the other day, but if the libel laws tighten up Barack Obama will end up owning Trump Tower