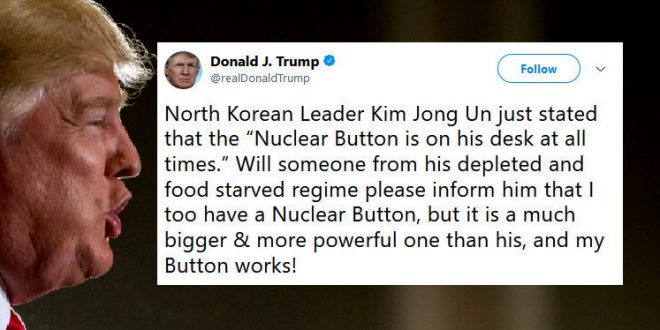 President Trump again raised the prospect of nuclear war with North Korea on Tuesday night, boasting that he commands a “much bigger” and “more powerful” arsenal of devastating weapons than the outlier government in Asia.

Mr. Trump’s combative response to a statement made in recent days by Mr. Kim raised the temperature in the brewing confrontation between the United States and North Korea even as American allies in South Korea were moving to open talks with Pyongyang. The contrast between Mr. Trump’s language and the peace overture by South Korea highlighted the growing rift between two longtime allies.

The president’s saber-rattling tweet shifted the tenor of his response to the South Korean initiative just hours after a milder initial statement. Mr. Trump, who has scorned the prospects of negotiating with North Korea, earlier in the day said the possible talks between the two governments on the peninsula resulted from sanctions imposed by the United States and the international community. “Perhaps that is good news, perhaps not – we will see!” he wrote Tuesday morning.

North Korean Leader Kim Jong Un just stated that the “Nuclear Button is on his desk at all times.” Will someone from his depleted and food starved regime please inform him that I too have a Nuclear Button, but it is a much bigger & more powerful one than his, and my Button works!

The same men who were *certain* a woman president would start a nuclear war because *feelings* are now looking at Trump threatening nuclear war & saying “it’ll never happen” so please for the love of fuck don’t tell me sexism didn’t play a part in the damn election OMG fuck you.

Trump just tweeted that he has a bigger nuclear weapon button than North Korea. We might just be doomed. He’s tweeting about nuclear war like it’s a PlayStation Game.

Trump in the last hour:

-Casually threatened nuclear war, dared an unstable dictator to nuke us
-Announced plans to give out awards to the “most dishonest and corrupt media” outlets
-Urged everyone to check out Sean Hannity at 9 o clock

This is all completely normal and fine.

Having a president like Trump who brags “Mine is bigger than yours” to overcome an apparent fear of impotence and emasculation would be merely pathetic if it didn’t risk nuclear war. Hate to say it, but @realDonaldTrump is a danger to civilization. https://t.co/4Fb708t9Is

TRUMP IS A NUT JOB
WHO IS PLAYING,“WHOSE
🍆IS BIGGER“,WITH ANOTHER NUT JOB FROM N.KOREA‼️TRUMP MAY GET US INTO A WAR,WITH HIS 12 YR OLD BOY ”NANNY,NANNY,NANNY“
TWTS‼️
THEY’RE PROBABLY BOTH THE SIZE OF
“ TOM THUMB”

I think Trump’s new strategy is to drag the world into nuclear war before Mueller can indict him so, even though life on earth will be over, he will forever be innocent

Hey @TwitterSupport, is it against your terms of service to provoke nuclear war with North Korea here? Don’t you guys have a button that’s even bigger than Donald Trump’s that you can use to shut this down? pic.twitter.com/7RjVd00Jnw

Our world could erupt into nuclear war at any moment because of Donald Trump’s penile hang ups.

Donald Trump goes on his most crazed rant yet, threatens nuclear war, appears to brag about dick size https://t.co/wQVNPqPWRg