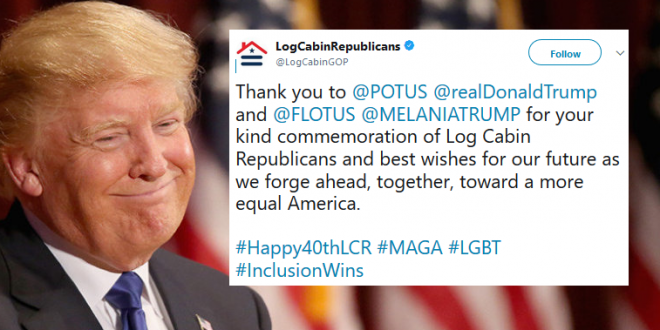 Daniel Reynolds reports at The Advocate:

The signed note, dated December 21, 2017, and printed on White House stationery, also addressed gay and racial equality. “We are a Nation founded on the undeniable truth that all of us are created equal. We are equal in the eyes of our Creator. We are equal under the law. And we are all equal under our Constitution,” the letter declared. Log Cabin released the letter to followers — and encouraged them to share it on social media — the day following Trump’s controversial proclamation for Religious Freedom Day.

“No American — whether a nun, nurse, baker, or business owner — should be forced to choose between the tenets of faith or adherence to the law,” declared Trump’s Tuesday proclamation. This language was interpreted as a veiled attack on LGBT Americans, in light of the pending Masterpiece Cakeshop, Ltd. v. Colorado Civil Rights Commission, a Supreme Court case focused on an anti-gay Christian baker who refused to make a cake for a same-sex couple. A lawyer from the Trump administration even argued on behalf of the baker. Thank you, @realDonaldTrump. I’ve waited a long time to have a GOP President with this kind of leadership. https://t.co/UOnYHhaHde

Thank you to @POTUS @realDonaldTrump and @FLOTUS @MELANIATRUMP for your kind commemoration of Log Cabin Republicans and best wishes for our future as we forge ahead, together, toward a more equal America.#Happy40thLCR #MAGA #LGBT #InclusionWins pic.twitter.com/2wct5QmeXY