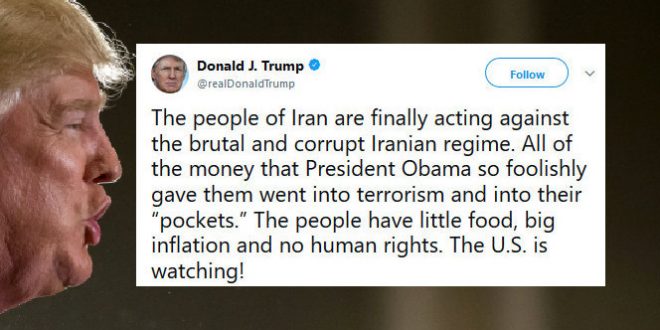 President Trump on Tuesday said the Iranian people are “finally” taking action against the country’s “brutal and corrupt” rule, again warning its leaders that “the U.S. is watching.”

The Trump administration has publicly said it supports peaceful protesters demonstrating against the Iranian government. In a New Year’s Day tweet, Trump said it is “time for change” in Iran, arguing the country’s “people have been repressed for many years.”

The people of Iran are finally acting against the brutal and corrupt Iranian regime. All of the money that President Obama so foolishly gave them went into terrorism and into their “pockets.” The people have little food, big inflation and no human rights. The U.S. is watching!

Previous The Last Jedi Hits $1B In Grosses, #1 For 2017
Next Christian Group Goes Viral With Ex-Gay Video