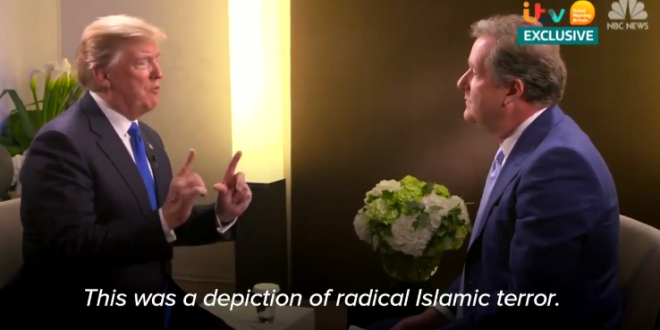 U.S. President Donald Trump apologized for retweeting the ultra-nationalist far-right group Britain First, saying in a TV interview he knew “nothing” about the organization at the time.

“If you’re telling me they are horrible racist people, I will certainly apologize if you’d like me to do that,” Trump told ITV Good Morning Britain presenter Piers Morgan. “I know nothing about these people.”

Trump’s three retweets of Britain First material caused a diplomatic incident last November, forcing British Prime Minister Theresa May to publicly criticize his actions. The president then took to Twitter to attack her back. But speaking to Morgan on Thursday, Trump denied he had been promoting Britain First as an organization.

“I don’t know who they are, I know nothing about them, so I wouldn’t be doing that,” he said. “I am the least racist person that anyone is going to meet. Certainly I wasn’t endorsing anybody … It was done because I am a big believer in fighting radical Islamic terror. It was a big story where you are — but it was not where I am. So you’re telling me something.”

The full interview will air on Sunday 28 January at 10pm on @ITV and available on the @itvhub. pic.twitter.com/Am5nH1jvPw

So the sitting POTUS admits he retweeted a far-right extremist group despite knowing “nothing about them”; begrudgingly apologizes; and @piersmorgan is too cowardly to call out the recklessness of his actions. Modern “journalism” in action. https://t.co/1vkc847Pl6

I got him to apologise. Pipe down you ludicrous little twerp. https://t.co/3RexRqQj4r

I asked President Trump to apologise for retweeting Britain First.
He replied: ‘I would certainly do that if you would like me to do that.’
He knew I did because I’d just asked him to, so self-evidently, he was doing what I asked and apologising.
End.

“I would certainly apologize if you’d like me to do that. I know nothing about them.”