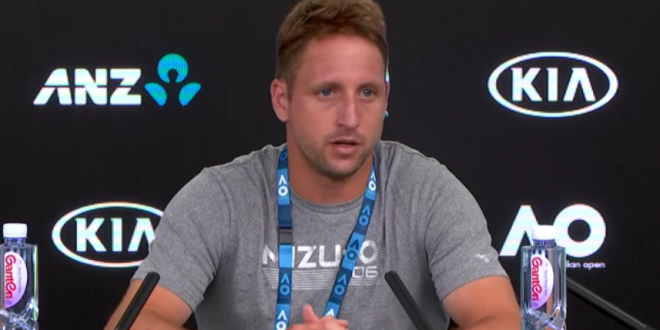 After being knocked out from the Australian Open in the quarterfinals on Wednesday, American breakout tennis star Tennys Sandgren blasted the media for its coverage of him in recent days. Sandgren, 26, made a surprise run through the Australian Open, but faced scrutiny over past Twitter use that seemed to support the alt-right movement.

Previous tweets and retweets from Sandgren’s account showed him debating Pizzagate, arguing that the media was not covering Hillary Clinton engaging in Satanic rituals, and interacting with alt-right media members, one of whom attended the white nationalist rally in Charlottesville, Virginia.

In his post-match press conference, Sandgren read a prepared statement from his phone. “You seek to put people in these little boxes so that you can order the world in your already assumed preconceived ideas,” Sandgren said. “You strip away any individuality for the sake of demonizing by way of the collective.

Sandren claims that since he is a “firm Christian” he cannot be a supporter of the far-right. But he’s also deleted his tweets. Meanwhile he’s drawn fire from Serena Williams after calling her “disgusting” for cursing during a match.

@TennysSandgren I don’t need or want one. But there is a entire group of people that deserves an apology. I cant look at my daughter and tell her I sat back and was quiet. No! she will know how to stand up for herself and others- through my example. ✊🏿 pic.twitter.com/im2NhoMdN4

Previous Sessions Credits Trump With Downtick In Violent Crime
Next ALABAMA: GOP-Run State House Approves Bill To Do Away With Special Elections For US Senate Vacancies